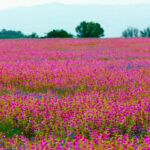 Kaas Plateau Tour also known as Maharashtra's Valley of Flowers. Kaas Plateau is situated on the
high hills of Sahyadri in the Western Ghats. It is the best place to visit in the monsoon, from the mid of
August to October. The whole plateau looks like a carpet in various shades. It's a unique place for flora
researchers, nature lovers & photographers. Near about 175 various flower species found at Kaas
Plateau and one of the few found on earth only at Kaas Plateau. In June 2012, UNESCO has
announced this location as a Biodiversity World Heritage Site. The plateau is home to 850 species of
flowering plants, of which 624 have entered the Red Data Book, a state document that lists species
whose existence is threatened. As many as 39 species are found only in Kaas region. Some of the rare
species found here include Dipcadi montanum, Ceropegia vincaefolia, Pleocaulus ritchiei and Drosera
burmannii. This is also the reason why the place is popular with nature lovers, flora researchers and
also photographers.Tour is ideal for People who are interested in Macro Photography and Landscape
Photography and Flora and Fauna and Wildflowers.