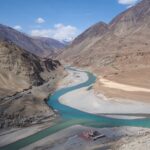 The Land of High Passes, Ladakh, the newly created Union Territory in India (previously a part of Jammu & Kashmir), boasts a landscape that can leave you with your jaws dropped. It is a place where the landscape changes dramatically, it is truly astonishing to see the mountains, snow, cold desert, alpine meadows and lakes at a short distance from each other. Tourism in Ladakh is an absolute delight for nature lovers as well as adventurers.

Adorned with the lofty barren mountains, Ladakh is home to some of the highest motorable passes like Khardung La (5359 m), Marsimik La (5582 m), and Chang La (5360 m), and alpine lakes like Pangong Tso (4350 m) and Tso Moriri (4522 m). Ladakh is further divided into three regions - Leh, Nubra, and Zanskar, and each region has several places to see.Ladakh is majorly popular amongst the adventurers who feel welcomed by the number of adrenaline rushing activities offered here. The union territory is amongst the top trekking destinations in India with amazing and unmatched treks like the popular Frozen River Trek/Chadar Trek. Ladakh also has opportunities for mountaineering, motor biking, mountain biking, white water rafting and more.

Adding to its exceptional beauty are the ancient Buddhist monasteries that are mostly nestled in the mountains and are thousands of years old. These monasteries make for the Buddhist pilgrimage destinations in Ladakh and also act as important cultural centers where major religious festivals take place.